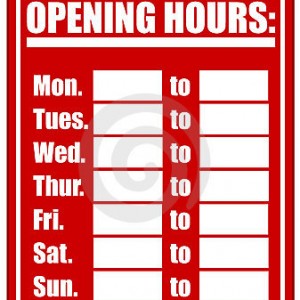 St. Maarten Government, via a new policy of the Ministry of Tourism, Economic Affairs, Transportation and Telecommunication, has extended the business opening hours for service providing businesses such as supermarkets, barber shops, beauty supply stores and gas stations for a period of one year.

All supermarkets, beauty supply stores (wholesale and retail), hair salons, and barber shops have been are granted an exemption and extended opening hours until 11:00pm for all days of the week (including Sunday) for a period of one (1) year.

All gas stations and the convenient store attached to the gas station are granted an exemption, and allowed extended opening of 24 hours, for all days of the week (including Sunday) for a period of one year.

These extended hours went into immediate effect as of the ministerial decree and opening hours policy publication in the Landscourant van St. Maarten (National Gazette) on November 22, 2013. This new decree and the policy is valid for one year and will subsequently be evaluated by government after one year on its effectiveness and compliance, to determine whether to make it permanent.

Those exempted form of businesses, no longer have to apply for extending hours permission from the ministry. All other forms of businesses must abide by the Landsverordening Winkelsluiting (Law on Business Opening Hours) and where applicable apply for the extended opening hours.

The ministry stated in the published policy by extending the opening hours of these service providing businesses, it is expected that consumers e.g. local community and tourists – in particular the shopping tourists from the surrounding neighboring islands- will be accommodated.

No exceptions will be granted for the following holidays: New Year’s Day, Christmas, Good Friday, Easter Sunday, St. Maarten Day and any other day that has been designated as a National Holiday, as stipulated in the Arbeidsregeling (Labour Law).

The policy adjustment, according to Government, is due to economic developments the existing trend is that many businesses, especially in the Philipsburg Center (Front Street, Back Street and Cannegieter Street) are closing later and opening on Sundays to accommodate consumers. In addition several supermarkets, hair salons, beauty supply stores, convenient stores attached to gas stations and barber shops as being service providing businesses- have extended their daily opening hours to accommodate the market.

That trend is a consequence of St. Maarten having developed into a dynamic metropolitan island and the demand by consumers (local and tourist alike) for more convenient hours has led several stores to extend their opening hours, government stated in the policy.

The existing ordinance governing the opening hours of business was first established in 1969 no.58 referred to as “Landsverordening Winkelsluiting.” The ordinance calls for stores to be closed on Sundays and days equal to Sunday and limited opening hours during the weekdays from 06:30am to 6:30pm.

According to Article 3 of the “Winkelsluiting Verordening” the following businesses are exempted:

a. Pharmacies as long as it regards the selling of medicines, pharmaceuticals and medical related items;

d. Shops located in hotels and buildings belonging to the airport and harbor.

e. Shops who specialized in selling:

i. burial clothing and accessories;

All other types of businesses that are considered as “winkels” can apply for a permit as per Article 1 (een winkel is een besloten ruimte waar of van waaruit waren in het klein, anders dan uitsluitend door middel van verkoop automaten, aan het publiek plegen te worden verkocht); excluding wholesalers and where solely vending machines are stationed, or any other type of business as stipulated by “landsbesluit h.a.m.” as a “winkel”.

Exception of Article 2 includes shops, which sell fresh meat, and products made of fresh meat and fresh fish to the public are allowed to open on Sundays and days equal to Sunday (in conformity with the Labour regulation) from 6 to 10.

The scope does not address the period November 28- December 4 and December 17 – December 30, because the opening hours are already regulated in article 5 of the aforementioned ordinance.

The legal basis for the policy change is regulated in article 7 of the “Landsverordening Winkelsluiting”. Given the possibility of an exemption in article 3 regulated in Article 6, the proposed amended policy is in conformity with all laws and regulations.

The existing ordinance on business hours (“Landsverordening Winkelsluiting) allows stores to open from 6:30am and close at 6:30pm during weekdays and to be closed on Sundays and days equal to Sunday.

To facilitate the changing social and economic climate of St Maarten, a policy was approved in 1996 to allow for stores in certain areas to open later than the regulated hours. In addition, in 2009, the concept of “Koopavond‟ was introduced on the Thursday evenings, allowing all stores on the Dutch side to be open until 9pm. However, due to the ongoing changing economic climate and in light of accommodating the business community, these policies need to be revisited and amended to further liberalizing of the opening hours.

Safety and security measures will have to be taken by the applicable store owners to ensure a safe and secure shopping environment for their shoppers e.g. consumers.

At present, since closing hours of businesses are in general after usual working hours of the economic controllers, police officers carry out the opening hours controls. Since the establishment of the Multi-Disciplinary Control Unit, consisting of economic, health, and labor controllers as well as members of the police force, the recommendation is to authorize this Control Unit to conduct controls pertaining opening hours. With the establishment of the Control Unit and therefore controls will be carried out on a consistent and regular basis, it’s recommended to look into the possibility towards a more liberalizing approach of the business opening hours.