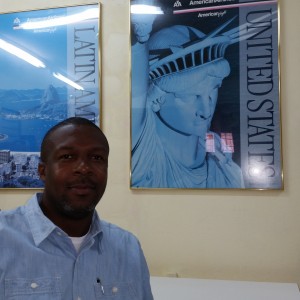 TERRANCE REY ABOUT CUBA AND THE INTERNAL THREATS TO ST. MAARTEN TOURISM

AMERICANS WILL TAKE A WAIT AND SEE APPROACH

GREAT BAY – How big a threat is Cuba really to St. Maarten’s economy and when will the effects hit us? Terrance Rey, managing director of several travel businesses like Let’s Travel and Travel Anywhere, Inc. says it will take at least ten years, but that the country should not wait that long before taking action. Marketing is of course the key word and exactly in that field, the island comes up short.

“You have to look first at our strong points,” Rey says in his Let’s Travel office. “What do people find attractive about St. Maarten? We have all the facilities that tourists have at home and they are comparable with what they have back home. I had a client who wanted to go to St. Barth just to see what the attraction of that island is. After a couple of days, he fled back to St. Maarten because he found St. Barth boring, even though it is a perfect island for a particular category of travelers. You go there for quietude, to see and to be seen.”

How does St. Maarten hold up against such a neighbor? Rey: “We are a small island; people are at the airport within an hour. We have beaches, bars and restaurants and we’re not far away from the US. Tourists are back home within a couple of hours.”

“People do not come to St. Maarten for the environment,” Rey adds. “If that were so attractive then islands like Dominica and St. Lucia would be top destinations, but they are not. People come to St. Maarten and they do not mind what some people call our concrete jungle.”

The dangers that are real threats to St. Maarten’s tourism industry are not external, but internal, Rey says. “The situation with the timeshare industry is a big problem. And there is the pollution caused by the landfill. You only need one tourist who claims that he caught something from it and decides to sue. That will have an effect, but you could asphalt the whole island and that would not be a problem. As long as the beaches are accessible, tourists will be happy. If that access is endangered, then we have a real problem.”

Another strong attraction point of the island is the casino industry, Rey says. “People come from other islands to gamble here. That is a real business opportunity.”

No matter what complaints people may have about telecom services and the utilities company, infrastructural St. Maarten is up to par for the tourism industry, Rey notes. “Tourist land here, they get their cell phone, their rental car and they have their entertainment in bars, restaurants, casinos and discos.”

That St. Maarten hardly ever shows up as a favorite destination in reader surveys from travel magazines and websites is “subjective” Rey says and he refers to what happened after the financial crisis in 2008. “Nothing happened. Our tourism industry grew. In spite of the crash, people kept arriving.”

Rey says that the island ought to cherish its timeshare owners, though the reality is that the government does nothing of the kind. “Our system has not been established to protect the small man. That’s why timeshare owners always draw the short straw, even though they are people with money.”

As an aside, Rey says that he does not understand why people but timeshare anyway. “What are you really buying? Hot air, that’s all, the right to be somewhere for a couple of weeks per year.”

What about that external threat called Cuba? Rey thinks that it will take time for Americans to truly embrace the destination. “On the political level Cuba needs to go through quite some development. It is still possible to get arrested there at random. Before Cuba is a free constitutional state we are ten years further down the road. The majority of Americans will take a wait and see approach.”

The travelers who visit Cuba are curious about the country, Rey adds. “They have been going there from Europe and Canada, but they end up in gated holiday resorts. They do not see a lot outside of the resort, so they are getting a very one-dimensional impression of the country. But the curiosity about the authentic Cuba is there.”

Jet Blue is going to open a service to Havana and charters have been servicing the destination from Florida. “But the occupation grade with American tourists was disappointing,” Rey says. “Most of the passengers were Cuban-Americans.”

However, with Jet blue in the mix, a certain market for Cuba-oriented travel will open. In spite of that, most Americans will be reluctant to go there, Rey says. “The image of Fidel Castro, the revolutionary, is still imprinted in people’s minds. So the first group to go there will consist of people who have strong ties with Cuba – the Cuban-americans who have family there, followed by adventurers and starry-eyed idealists.”

There is however yet another group that is eyeballing Cuba: entrepreneurs. “I have already organized three charters to Cuba for real estate developers and timeshare entrepreneurs,” says Rey, but he thinks that doing business in Fidel’s backyard will be cumbersome at best for years to come.

“The Cuban government wants to keep a big finger in the pie. They want 50-50 business deals and they want to remain in control.”

Like anywhere else, the success of doing business in a foreign country depends on whom you know and on the networks you have, says Rey. “Cuban-Americans will have an advantage, because they have those contacts. The political process will take time. Only when the resorts, the casinos, the timeshare projects and the cruise industry have developed their Cuba-projects will St. Maarten be in danger.”

There is an upside to this story, Rey says. “We have time to react to this situation. We have to create awareness, and we have to do our marketing and promotion. But in the field of marketing the government is not doing anything right now.”