Apart from some sweltering days of summer, the 2013 Atlantic Hurricane Season proved to be an easy, sometimes a little breezy one. The annual season officially ended with the fewest number of storms forming in the Atlantic Ocean since 1982.

St. Maarten/St. Martin counts itself lucky and appreciative that it was spared the rigors of being touched by one of the 13 named storms formed between June and November 2013. There is even more thankfulness that the island was spared the wrath of storms Ingrid and Humberto, which developed into hurricanes, though not major ones.

As the island enjoy much welcomed wintery after hurricane season breezes, it serves us well to reflect of the suffering of our fellow human beings in the Pacific side who have had to endure the onslaught of Typhoon Haiyan (called Typhoon Yolanda in the Philippines). This exceptionally powerful Category 5-equivalent super typhoon devastated portions of Southeast Asia, particularly the Philippines, in early November 2013. 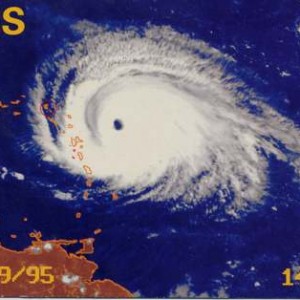 Scenes from the typhoon devastation, conjures up memories of devastating Hurricane Luis of 1995. That super storm flattened the island and changed life in St. Maarten/St. Martin forever. The economy came to standstill, food and water were scarce, and housing was limited. The scenes flicking on television screens from the affected areas in Southeast Asia strike a chord here in the peaceful tropics of the Caribbean.

This unexpectedly low activity is linked to an unpredictable atmospheric pattern that prevented the growth of storms by producing exceptionally dry, sinking air and strong vertical wind shear in much of the main hurricane formation region, which spans the tropical Atlantic Ocean and Caribbean Sea.

NOAA said it will issue its 2014 Atlantic Hurricane Outlook in late May, prior to the start of the season on June 1.

Weather has no master and its domain is the world. As we move on to cooler times and the new year of 2014, let’s remember to be always prepared.